Core Ten is excited to share the news that one of our clients – Blake Pickard, 17 – has been recruited to play football for the UBC Thunderbirds starting this fall. 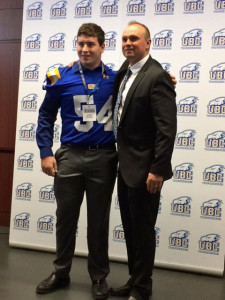 Blake came to us in Grade 7 at 5’5 ½” wanting to improve his strength and agility, as he had caught the football bug playing in the North Shore Football League (formerly GSL) here in North Vancouver. 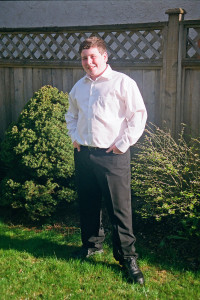 Mark was happy to take on one of our first teen clients and says he really enjoyed training with Blake. “Blake came in to the studio with lots of raw talent and a very football friendly physique, although he needed to lean down and build more muscle mass. He worked really hard to improve. I couldn’t be more proud of what he has accomplished,” Mark says.

Blake’s desire to play football was so strong that he ended up transferring to Notre Dame Secondary School in Vancouver for Grade 10 so that he could play in a high school program. After a true immersion experience in his first year playing for both the Junior and Varsity teams, Blake started to emerge as an offensive line threat and that’s when he was first noticed by the UBC recruiting team.

This year he was named a defensive line All Star in the Western Conference and also won the Most Valuable Lineman trophy in the annual Archbishop’s Cup game between Vancouver College and Notre Dame. He also finished second in the province in his weight class in wrestling.